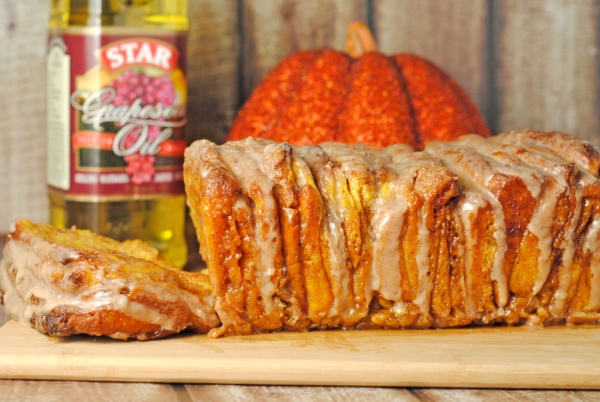 Combine the flour, sugar, yeast, and salt in the bowl of a stand mixer fit with a dough hook.

Heat the milk in the microwave for 45 seconds-1 minute, or until it is very warm.

Add the milk, grapeseed oil, pumpkin puree, vanilla, and eggs to the stand mixer with the dry ingredients. Knead the dough on low speed until everything begins to come together, then turn the mixer to medium and knead for 5 minutes, or until the dough forms a ball and pulls away from the sides of the bowl. Add extra flour, if needed, 1 tablespoon at a time to help the dough form a ball (I added 1 extra Tbs. of flour). Dough may still stick a bit to the bottom of the bowl, and will feel tacky (but not sticky) to the touch.

Place the dough in a lightly oiled bowl, cover the bowl with plastic wrap, and allow the dough to rise until it has doubled in size (1-2 hours).

Once dough has risen, gently deflate it and place the dough ball on a lightly-floured surface. Allow it to rest for another 5 minutes. Roll the dough out into a 12×20 inch rectangle and coat it with the cinnamon sugar filling.

For the Cinnamon Sugar Filling

Melt the butter in a microwave-safe dish.

In a bowl, mix together the sugar, cinnamon, nutmeg, ginger, and cloves until well-combined.

Brush the butter in an even layer over the rectangle of dough. Evenly sprinkle the cinnamon sugar mixture over the dough.

Cut the dough into six 2-inch-wide strips (lengthwise). Stack the strips on top of one another and cut them into six equal sections. Stack each section into a well-buttered 9×5 inch loaf pan. Cover the loaf and again let it rise for another 45-60 minutes.

Once loaf has risen, preheat the oven to 350. Bake the bread loaf for 30-35 minutes, or until the top has turned a deep golden brown. Allow the bread to cool for 20 minutes in the pan before removing and glazing.

For the Pumpkin Spice Glaze

Mix powdered sugar, milk, and pumpkin pie spice together in a bowl. Add more milk, as needed, to thin glaze to desired consistency.

Pour glaze over the top of the pumpkin loaf, let it set, and serve.